My mind seems to have been all over the place lately.

I’ve been preparing for the Discover Original Art exhibition – more over at my website (click here for gallery details) – which starts  on Wednesday this week, 3rd June.

I’m so pleased to have had this date to work towards, because although at times I felt as if things weren’t ever going to come together, knowing that I had to get there, eventually worked its way into my subconscious and turned things around. 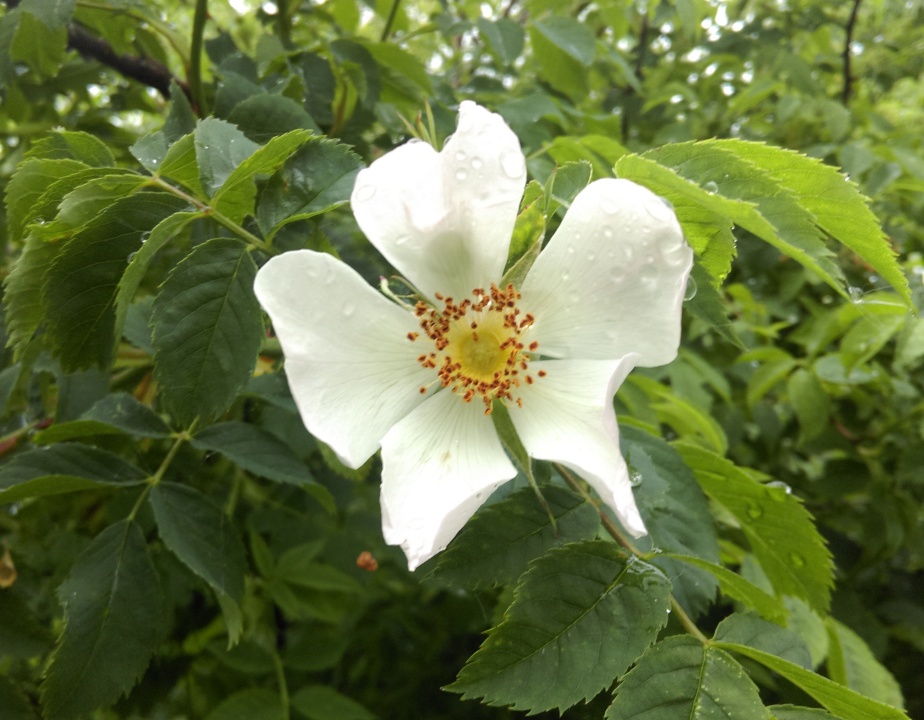 This last 12 months has seen the most amazing upheaval in my approach to making art. Twelve months ago, I had a stack of stitched canvasses sitting on a shelf, with no one except immediate family and you, my lovely blog readers, ever seeing any of them. Now, less than a year later, I’ve met and joined a local community of wonderful artists and begun to find my voice in the real, as well as the virtual world. 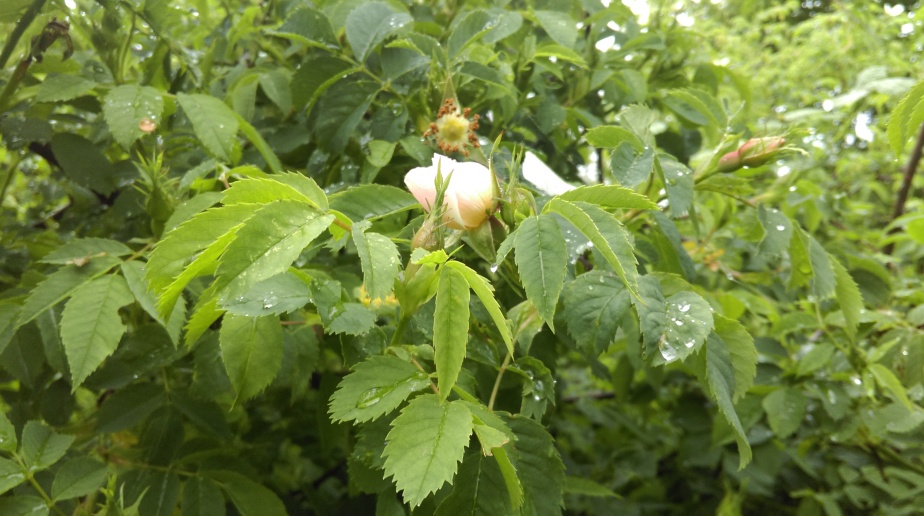 In a very literal way, I’m beginning to feel as if various threads in my life are now coming together.

A year ago, I wouldn’t have dared think of myself as an artist. Now, well, it doesn’t feel too far-fetched. 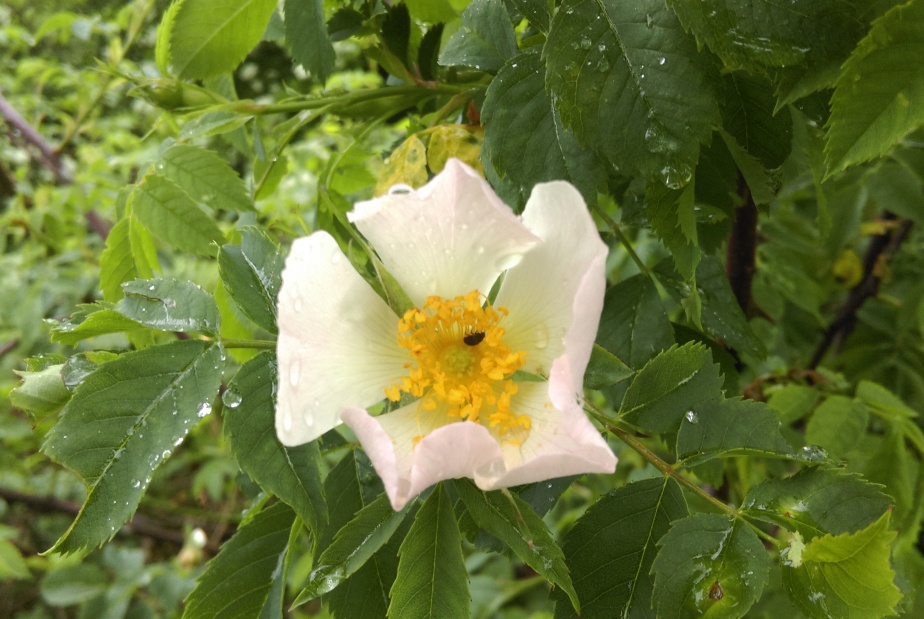 So having dates to work towards helps remind me that this is real, and at last there’s the freedom to make art without feeling guilty, which for me, is the most amazing gift imaginable.

Keeping my head together though, with home, family and art to juggle, is helped enormously by the daily routine of walking the Delinquent Dog.

Over the last week, everything seems to be growing at such a fantastic rate. The pictures in today’s post were taken this morning and last week – proof that however hard we try, nature just does it all so much better…

I just don’t seem to be able to get away from greens at the moment. I suppose that this year, even more than usual, I’ve been tuned-in to greens, having been working with a green palette for quite a few weeks.

Embroidery – well the way that I do it – is an extremely slow art form, and all those hours of stitching, inevitably lead you into a very close relationship with the different shades you’re using.

And similarly, the various textures, coarse tweeds, strong wools, fluid silks, all play differently in your hand and in the canvas – all working together in sometimes unexpected ways.

Trying to plan what goes where I find to be a fairly pointless exercise. Instead it seems to be better to simply let each thread decide, according to what else is happening around it.

Impossible at this most verdant time of the year, to ignore the way that the countryside changes colour. So many delicate plants appearing in the lane every day now, but all held together by nature’s tapestry of green.

All photographs taken in the lane on the daily dog walk, over the last couple days. Follow me on Instagram for other daily pictures…

Some people regard May Day as the first day of summer – well, in some ways I agree, there’s definitely a lot happening in the hedgerow now, foliage is growing so fast, you feel as if you could practically watch it unfurling in front of you. But having spent the hour of our walk with my eyes streaming from the cold wind this morning, I can tell you, it doesn’t feel like summer just yet!

After the last post here and my admission that greens give me problems, I realised just how many greens I see every day on the trip along the lane and through the wood. I’ve been observing them with more attention than I’d normally give it, and what I’ve learned, is that there are more shades of green that I can imagine, and Mother Nature doesn’t seem to mind how she puts them all together – and yet, it works…

It’s hard for me to believe that it’s nearly a full year since I started the daily tree project, but there we are, time flies and all that. 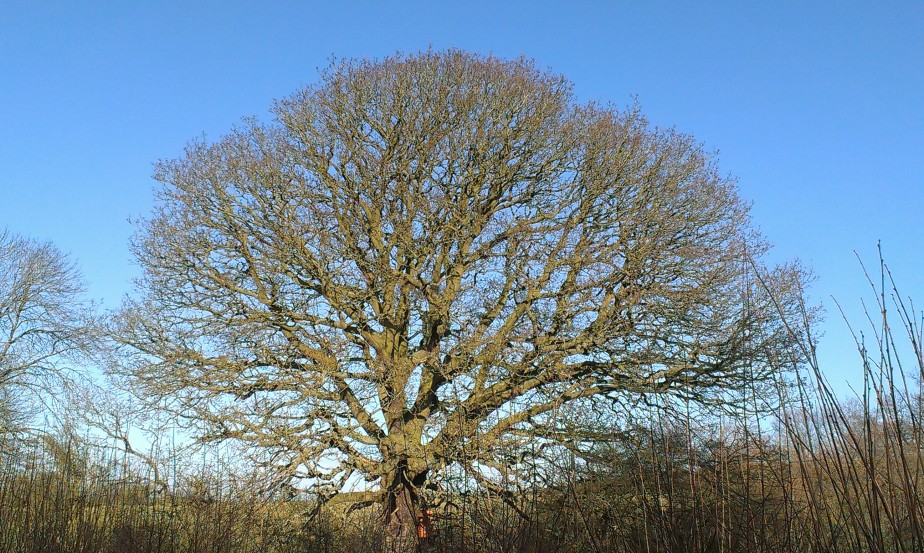 This was the oak on Christmas Morning. It was a simply gorgeous time to be out and about. There had been a slight frost, but almost all was gone when I took the Delinquent Dog for his constitutional, instead there was an almost warm sunshine and fabulous blue sky.

Taken at the same time of day as the previous picture – just goes to show how huge an impact the weather has on the way you see things around you.

And after almost twelve months of watching that oak pass through the seasons, it’s really the weather and the changes in light each day that have held me most in thrall.

I know we’re incredibly lucky to live in a country where the weather varies so much, even if we’re famous for using it as our stock conversation line – it’s not difficult to see how it must affect us, when you realise just how many shades daylight comes in.

Over the year, I’ve learned just how ignorant I am about natural history. I’ve watched countless species of green plants emerge from the hedgerow, grow and die down, and managed to identify only a few of them. I’ve seen lots of wildlife. Squirrels top the list of animals, although rabbits have their season, and we’ve seen quite a few deer over the year too. Fox encounters have been rare, but actually my favourite, they seem almost as intrigued by us as we are by them, they stand and take us in for a few seconds, assessing us, before judging it best to run and hide. I’ve practically never managed to get the camera out in time.

Birds are even more difficult to photograph. We are in a red kite area, and from time to time, I’ve stood and watched them wheel around above the field, but my pictures are no use at all. We see lots of jays, which always give me a little thrill, it’s just that flash of colour you can’t miss. And at the moment, we seem to be seeing robins everywhere – but maybe that’s just a function of the season!

But birds and squirrels, lovely though they are, haven’t taught me as much as the trees, hedges and plants about the passing of time. Even at the beginning of December, (2nd December above), there were still a few leaves left on the hornbeam hedge, now though, after the wind, rain and frosts, there’s not a leaf remaining.

The 19th December and all the leaves have finally gone.

Sometimes, as we get older, we talk about how time flies, and of course there are ways in which this feels right, but having spent a year walking the same route, almost every day, stopping to look and notice what’s happening along the way, it seems to me that a year is a long time, a full and rich time, in which a whole cycle of life and death has passed, and already I’m looking out for the signs of life beginning all over again. I find that immensely reassuring and exciting too.

I haven’t quite decided what to do next year. It won’t be possible to walk past the tree and not take its picture, but I’m not sure if I’ll post them on Instagram (where, by the way, you can see almost every day’s photo from this year) and I think perhaps there should be something new here on the blog for 2015. But having amassed pictures from 2014, I’m quite keen to do it again and compare year-on-year. This, I strongly suspect, will be of far more interest to me than anyone else, and although I would one day like to be the sort of old dear who’ll tell you how late spring is this year, how the bluebells are early and how things were different in her day, I’m not quite ready to be that woman just yet.

Next month, I’ll do the January 2014 vs January 2015 post – just so we can see the full circle. I hope you’ve enjoyed the Tree Time posts, if anyone feels like doing something similar, I’d say don’t hesitate, ‘do it!’ You probably won’t learn what you thought you might, but I guarantee you’ll discover a lot of new things.

We had such a marvellous weekend exhibiting at the Discover Original Art Fair, – massive thanks to everyone who came –  I’ve not quite got my feet back in the real world.

I have so far managed to ignore the tsunami of ironing which is engulfing the downstairs shower room. The grocery shopping happened, and the Delinquent Dog has had a few decent walks, but I’m sure there’s something else I should be thinking about…

Would  anyone mind if we put it back a few weeks…

Nothing quite like a blue sky for lifting the spirits… 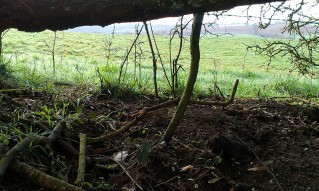 Can’t resist peeping through the hedge to see the view… 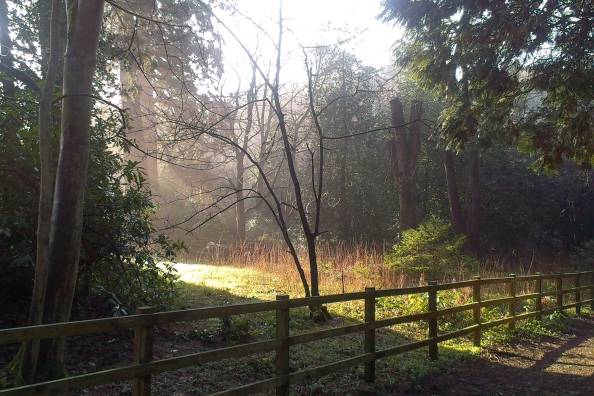 early light in the wood… 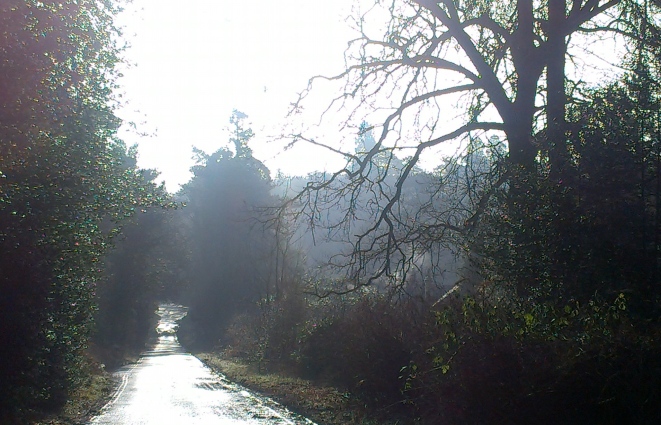 there was a woodpecker up there somewhere, but I couldn’t see him!

This week there’s been rather more blue sky than grey – leaps up and down with joy! Even the wet days were beautiful in their own way.

All pictures taken during the morning dog walks this week.

Over in the sidebar, are my Instagram pics of the Daily Tree Project, with the occasional stitchy update and other random snaps from daily life around here.