It’s hard for me to believe that it’s nearly a full year since I started the daily tree project, but there we are, time flies and all that.

This was the oak on Christmas Morning. It was a simply gorgeous time to be out and about. There had been a slight frost, but almost all was gone when I took the Delinquent Dog for his constitutional, instead there was an almost warm sunshine and fabulous blue sky. 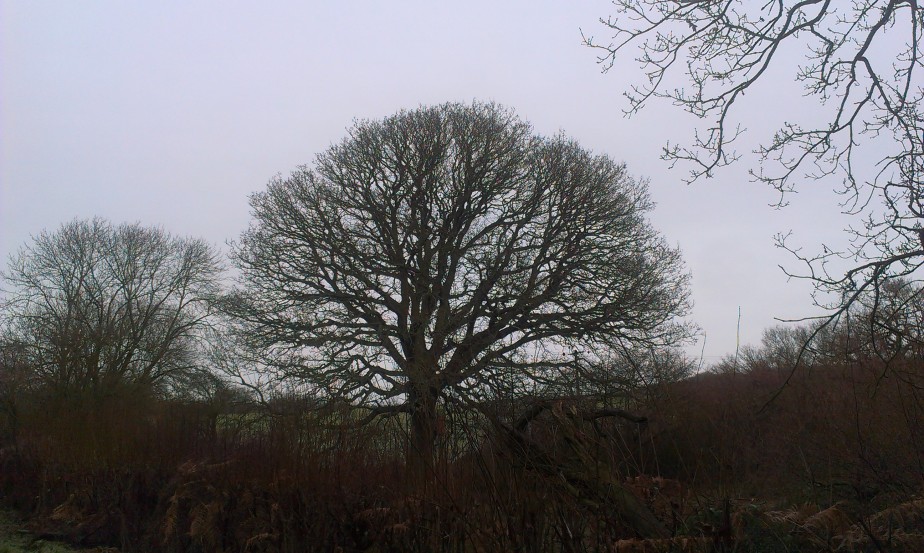 Taken at the same time of day as the previous picture – just goes to show how huge an impact the weather has on the way you see things around you.

And after almost twelve months of watching that oak pass through the seasons, it’s really the weather and the changes in light each day that have held me most in thrall.

I know we’re incredibly lucky to live in a country where the weather varies so much, even if we’re famous for using it as our stock conversation line – it’s not difficult to see how it must affect us, when you realise just how many shades daylight comes in.

Over the year, I’ve learned just how ignorant I am about natural history. I’ve watched countless species of green plants emerge from the hedgerow, grow and die down, and managed to identify only a few of them. I’ve seen lots of wildlife. Squirrels top the list of animals, although rabbits have their season, and we’ve seen quite a few deer over the year too. Fox encounters have been rare, but actually my favourite, they seem almost as intrigued by us as we are by them, they stand and take us in for a few seconds, assessing us, before judging it best to run and hide. I’ve practically never managed to get the camera out in time.

Birds are even more difficult to photograph. We are in a red kite area, and from time to time, I’ve stood and watched them wheel around above the field, but my pictures are no use at all. We see lots of jays, which always give me a little thrill, it’s just that flash of colour you can’t miss. And at the moment, we seem to be seeing robins everywhere – but maybe that’s just a function of the season!

But birds and squirrels, lovely though they are, haven’t taught me as much as the trees, hedges and plants about the passing of time. Even at the beginning of December, (2nd December above), there were still a few leaves left on the hornbeam hedge, now though, after the wind, rain and frosts, there’s not a leaf remaining.

The 19th December and all the leaves have finally gone.

Sometimes, as we get older, we talk about how time flies, and of course there are ways in which this feels right, but having spent a year walking the same route, almost every day, stopping to look and notice what’s happening along the way, it seems to me that a year is a long time, a full and rich time, in which a whole cycle of life and death has passed, and already I’m looking out for the signs of life beginning all over again. I find that immensely reassuring and exciting too.

I haven’t quite decided what to do next year. It won’t be possible to walk past the tree and not take its picture, but I’m not sure if I’ll post them on Instagram (where, by the way, you can see almost every day’s photo from this year) and I think perhaps there should be something new here on the blog for 2015. But having amassed pictures from 2014, I’m quite keen to do it again and compare year-on-year. This, I strongly suspect, will be of far more interest to me than anyone else, and although I would one day like to be the sort of old dear who’ll tell you how late spring is this year, how the bluebells are early and how things were different in her day, I’m not quite ready to be that woman just yet.

Next month, I’ll do the January 2014 vs January 2015 post – just so we can see the full circle. I hope you’ve enjoyed the Tree Time posts, if anyone feels like doing something similar, I’d say don’t hesitate, ‘do it!’ You probably won’t learn what you thought you might, but I guarantee you’ll discover a lot of new things.