Just a few weeks into this quest to understand who wrote the plays of Shakespeare, and I have to say, if you’re trying to keep your brain active, forget Sudoku’s or cryptic crosswords, there’s more than enough here to keep the synapses busy.

Anyway, as I mentioned, I started off with a book by Diana Price – Shakespeare’s Unorthodox Biography, because it was obvious very quickly, that I didn’t know very much at all for sure about the writer, and I wanted a source that would look at the actual evidence, and discuss its context and interpretation in a less emotional way than those authors who are closely bound up with theories for particular candidates for the Shakespeare authorship.

It’s not a particularly difficult read, but you’re not far into it before you start to understand just how complicated this quest is – what we have, it seems to me, is a giant Elizabethan jigsaw puzzle, with most of the pieces missing, and to make matters worse, we don’t know if the pieces we do have, fit together in one puzzle, or whether some pieces are part of an entirely different puzzle.

But before I get carried away, the first question I wanted to answer was this – why is there any debate at all about who wrote the plays of Shakespeare, after all, we’re familiar with his name, his plays and his connection to Stratford-upon-Avon – where is the area of doubt?

The answer – it seems – is that whilst we can be pretty certain a man called something like William Shakespeare (even the question of alternative spellings could keep you busy for months…), went to London and was involved in theatrical companies there, no contemporary evidence survives which confirms him as a writer.

So, going back to the jigsaw analogy, we have about 70 pieces that could fit into a picture of a Stratford actor, financier, play-broker, wheeler-dealer, but none that fit into the picture of a playwright.

That means, either he did write the plays/poetry, we just don’t have any evidence, or, someone else wrote them.

And that’s the debate. Into that gulf of un-knowing, flows a massive river of conjecture, theory and conspiracy – brilliant isn’t it!

So, the result appears to be, that people who think the man from Stratford did write the plays, look at the pieces of the jigsaw and try to fit them all into a picture of a playwright, trimming off the edges, bashing pieces that don’t fit too well, hiding the really difficult bits under the carpet, until they accommodate the pieces into something resembling a playwright.

Whilst people who think someone else wrote the plays, look at the pieces and say, no, these pieces don’t belong to the picture of a playwright at all –  William Shakespeare must have been the pen-name of an aristocratic person, unwilling to publish under their own name, we must look for clues about his/her identity somewhere else.

Now, the bit that really confuses me, is this – if you’re an aristocratic would-be playwright, turning out sublime poetry and prose, but unable for reasons of political sensibility or social mores to use your own name, why choose instead, that of a Warwickshire actor with a debatable reputation? Coincidence?– really?

So, without – as far as I know yet – a shred of evidence to confirm it – the assumption is, that the man from Stratford put his name to plays which he took/bought/acquired from a shady aristocratic writer, presumably in a relationship that benefited both parties – otherwise how would it have continued?

My plan, now that I’m beginning to see the big picture and understand the groundwork, is to re-read Price’s book, listing out my questions to follow-up on next.

I’ve become aware of a lot of the anti-Stratfordian positions so far, but in the interests of balance, I’m going to try out an orthodox biography soon to see which questions that raises.

Do join the debate if you’re interested – you won’t be bored!

There was a big surprise in the lane this morning – a huge tree had come down across the road. 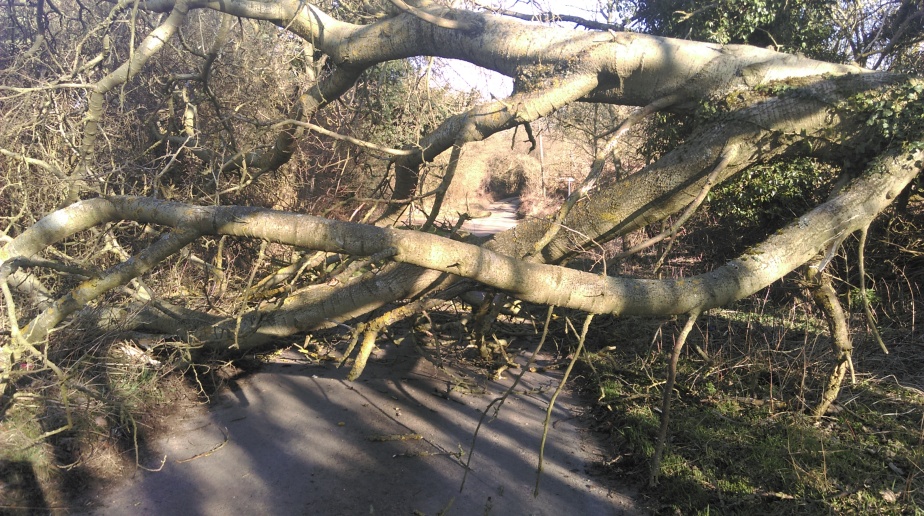 Fortunately not my old oak, and hopefully nobody hurt.