OK, so it’s confession time – I’ve been up to no good.

The sun came out this morning and I was filled up with the need for colour. And so I tried to be good, I really did. I pulled out my yarn stocks and had a good rummage around. I have loads of course, but you know how it is, in my mind, I wanted rich jewel purples and reds and deep fathomless blues

And there just weren’t any that were quite right.

You know where this is heading don’t you… 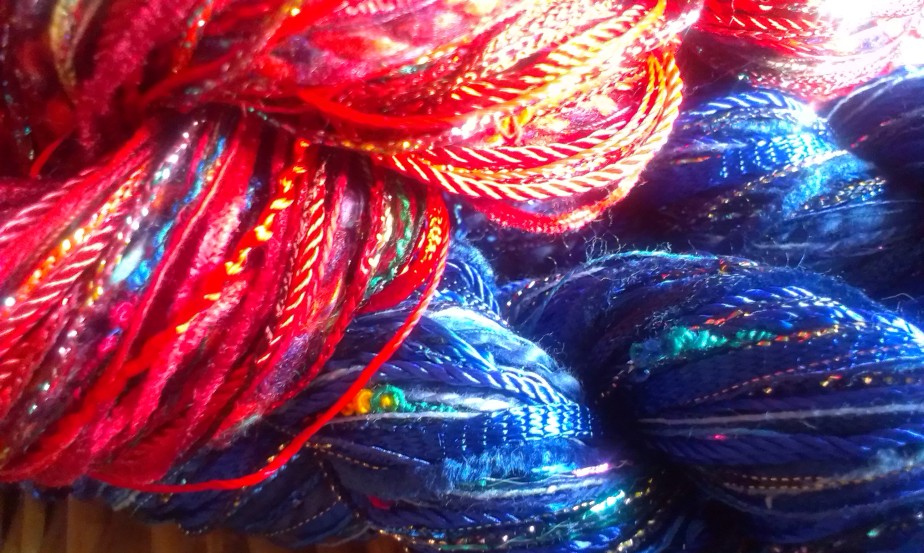 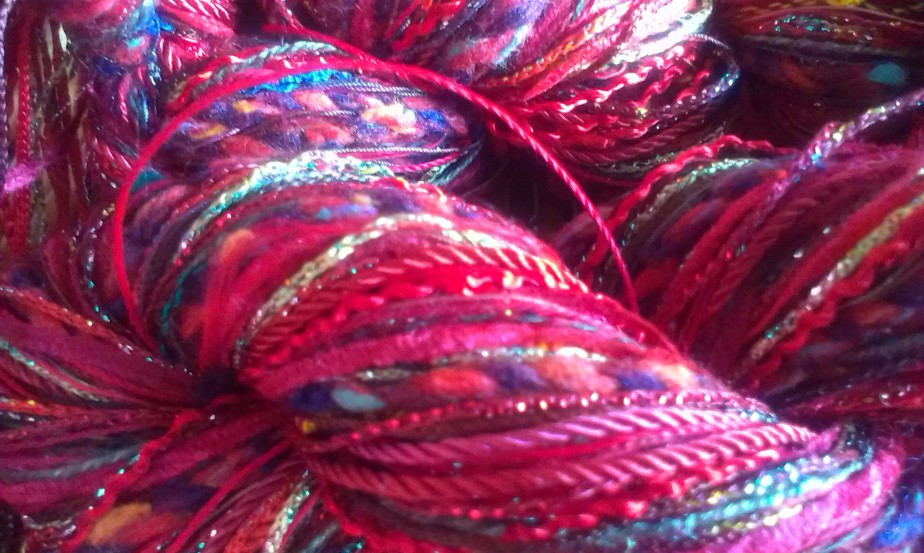 Well, it had to be done.

The yarn with the curly texture, is recycled sari silk. I probably wouldn’t have had the confidence to give it a go until I started couching, but now I’m feeling happy that I can use it even if it turns out to be a pain in the proverbial.

The mixtures are from Oliver Twists – I don’t so much want to stitch with these, as to drape them all over me and hiss ‘my precious’.

Thank you to Rainbow Silks in Great Missenden for this little hoard. (And I don’t feel too guilty, it didn’t break the bank).

I can feel something stained glass-ish coming on again. Better go and start playing.

Just when I thought I’d sorted out what I’d be doing for the next few weeks, along comes the delivery of linen scrim, and within no time at all, I’m diverted off on to another track.

I wanted to try the scrim, because although I adore the variable, loose weave of the hessian that I’ve been using, it is hairy and I think gives me a few issues with sneezing and sore hands.

Linen scrim seemed to be a useful alternative.

I quickly set up a piece on the 17″ frame – it felt as if it needed a frame – and put needle to the canvas.

The first thing that struck me, was that this scrim is going to take a lot of stitching – sooooo many stitches! (I estimate about 20 stitches per linear inch – 400 per square inch). I’m not afraid of working large or slow pieces, but this felt a touch daunting.

But once I’d experimented with different strands of wool/silk/cotton, I found I’d somehow become attached to it. I had originally thought I’d just do a few square inches to see how it worked, but now I’m sure I’ll carry on with it.

As with the hessian, I find that the softer canvas feels attractive to work on.

On the plus side of using the tiny gauge, I now have a good excuse to use some of the yarns I’ve been keeping from Stef Francis and Oliver Twists – yarns that would have been lost on a bigger gauge piece. I’ve also tried out some Anchor Perle cotton. It fascinates me how each different type of thread lies down in the canvas with its particular character.

So, a delay on progressing the stonework idea – but a bit of an education going on instead.