We’ve been watching Tony Robinson on TV – he’s got a new series on Channel 4 – Britain’s Ancient Paths – walking some of the old routes, talking to historians and staying in rather nice pubs (they didn’t ask me if I’d like to do it – I’m a bit miffed), but also there seem to be repeats of his previous history programmes on practically every time I zap the channels.

And purely by coincidence and for no good reason, I’d only recently started following him on Twitter (@Tony_Robinson if you’re interested), so for a while I’d begun to feel he was becoming part of the family.

Then again, he’s been something of a constant companion in many ways over the last 30 years or so, from playing Baldrick in the Blackadder series during the 1980s, the wonderful and hugely missed TIme Team era from 1994 until 2013, the post-Time Team documentaries and last but not least his narration of Terry Pratchett’s Discworld audio-books and his voices on the Discworld video game (what, never played it? You haven’t lived…)

The last episode I saw of Britain’s Ancient Paths had Tony walking a stretch of the Ridgeway which is claimed to have been used by locals and every invading army for over 5000 years.

Watching him, it immediately brought to mind a public information film I remembered seeing when I was at school back in the Dark Ages. It had made such an impression at the time, especially the disappearing lady with the Timotei hair, that I felt compelled to search YouTube and see if it still existed anywhere there – and lo! Look what I found…

Crikey I can’t tell you how this took me back (I’m beginning to sound like an old-dear I know, but still…)

Anyway, as a result, inspired by Sir Tony and the Timotei woman, off I went up onto the Ridgeway a couple of Sundays ago, to swish my hair and admire the odd autumnal view.

The autumn colours were just beginning to set in – we’ve had a very late-onset autumn this year don’t you think? More of a very long summer. But it’s definitely changed over the last two weeks and so it was time to make our annual pilgrimage to Stowe Landscape Gardens to gasp in awe at the colours and play trains in the fallen leaves.

Which brings us to the other gentleman who’s been cropping up – Capability Brown (I’m not going to use his Christian name if you don’t mind, Lancelot for me will always bring up visions of John Cleese in Monty Python and the Holy Grail and we don’t need to go there today)…

Capability Brown as I’m sure you know changed the way we think about the English landscape by creating classical romantic idylls for his rich patrons in the eighteenth century. Stowe was where he first cut his garden design teeth and whatever your take on the politics of that era, there’s no denying the beauty of what he created.

Brown went on to create well over 100 more of his ‘landscape gardens’ and many of them remain to this day.

One which I had never visited previously is at Croome Park in Worcestershire, now owned and being restored by the National Trust. On Monday we headed over there to meet up with my big brother and what a fabulous surprise we had – Croome is just gorgeous.

I’m sure the golden autumn colours and faint haze from the morning fog added a special filter, but nevertheless, what an amazing creation.

Every new vista seemed to make me giggle with the complete loveliness. 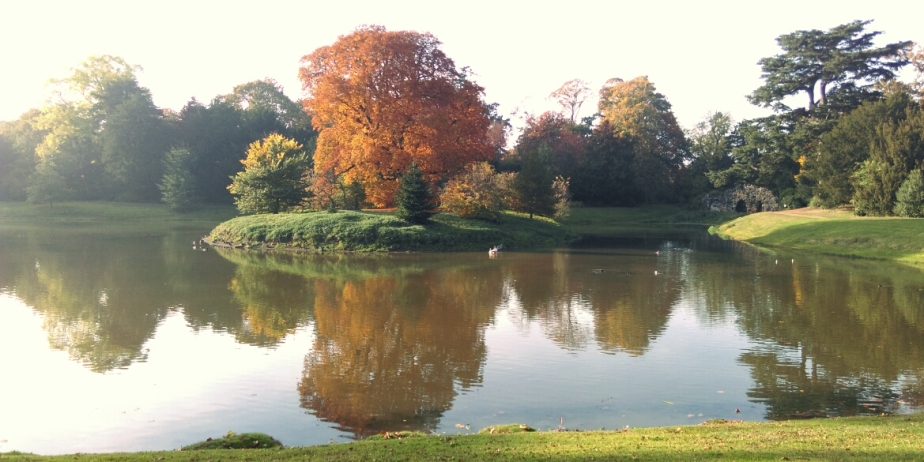 So much thanks to Brown and Robinson, I’m feeling well set up and ready for the colder months, embracing the seasons and indulging in my own version of hygge.

Where do you like to celebrate autumn? And what does autumn mean to you? Do you have any special family rituals at this time of year?

13 thoughts on “A little Brown and Robinson…”