It sometimes feels strange to live on an island where there remains considerable evidence of our distant ancestors in the landscape and in the monuments they built, but to know so very little about them. Developments in archaeology in recent decades have certainly lead to far more exploration of neolithic sites, but for me at least there is a huge gulf between what we now ‘know’ and what there is we’d really like to know.

So while the archaeologists carry on their painstaking work to uncover and discover facts, we’re left to fill the gap with our imaginations.

Having now become well and truly hooked on this pre-historic enigma, you can appreciate why I leapt at the chance to make a flying visit to Orkney – an island group off the North East tip of Scotland, rich in marvellous and mysterious neolithic sites.

It would have been difficult to imagine a more lovely day for our visit. A near cloudless blue sky reflected in the sea and the lochs, creating a sublime combination of emerald greens and sapphire blues beneath us as we flew over Scapa Flow.

This was my first visit to the Orkney and I wasn’t prepared for just how beautiful it is. It absolutely took my breath away. But we had just a few hours to explore, so we began by overflying the area we planned to visit on land – Skara Brae, Maeshowe and the Ring of Brodgar.

Skara Brae had to be the highlight of the visit and it was the first site we headed for once we landed.

There’s been a lot of television coverage of Skara Brae in recent years, but nothing quite prepared me for seeing it in person. Built around 3000BC, it was a subterranean village, hidden under sand for centuries, but revealed in the 19th century after a storm removed some of the layers covering sand. 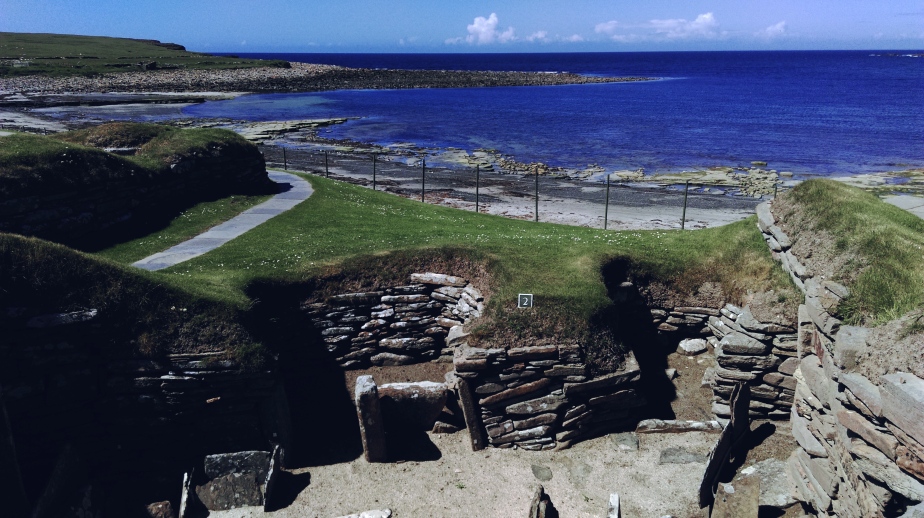 As you walk around the village, looking down from the path above, your mind goes into overdrive, trying to mentally construct the village as it once was, seeing it with your mind’s eye, peopling it with men and women who looked just like us but about whom there is so much we don’t have a clue about.

Perhaps the most iconic view of Skara Brae is this one… 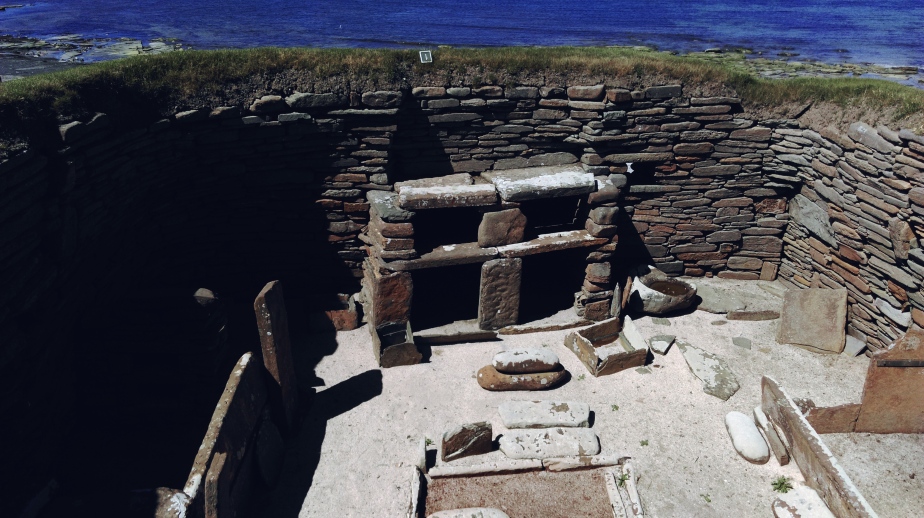 Who is there of a certain age who isn’t thinking ‘The Flintstones’ when they see this?

But this is absolutely real! How did the residents use that stone dresser? I couldn’t stop wondering about it. What would you do with it if it was the centre-piece of your house?

Then look around – either side are the stone remains of the bed-spaces and in the middle, a hearth. In the walls are niches – what was kept inside them?

It would, I am sure, be entirely possible to spend weeks just looking at Skara Brae and trying to understand it, let alone uncover more (and yes, the archaeologists are fairly certain that much more of the site remains uncovered). But with only a few hours to spare, we moved on.

Our next stop was to visit the Ring of Brodgar.

Here is a stone circle from around 3000BC, comprising stones from across Orkney – 36 remain of the original 60, laid out in a circle and surrounded by a henge. Strange mounds also feature in the local landscape adding so much to the mystery that already surrounds this amazing place.

Where Skara Brae leads you to attempt to answer the questions, here I felt I was in quite a different place. For all the theories and there are many, nobody yet or perhaps ever will know why these circles were constructed. That it took a great deal of effort is evident, so why did people not so different from you and me undertake that task? What would make you do it?

I admit that standing there, inside that circle, I wasn’t exactly trying to think about the logistics of building it, I was simply enchanted by being in the circle – standing there and turning 360 degrees, looking out at the landscape around the Ring, looking up at the sky contained by the Ring, touching the individual stones as I walked past each one.

That there was a meaning I’m sure, but what it was? Perhaps we all decide for ourselves…

Inevitably I suppose we began to run out of time to explore the rest of the sites in this sequence – the Stones of Stenness (just a mile from the Ring of Brodgar) and Maeshowe.

In the end we found ourselves dashing back to Kirkwall with only a very few minutes to flit inside St Magnus’s Cathedral – so little time that I didn’t manage to take any decent pictures.

But long enough to confirm that I must return to Orkney, this time with the freedom to explore much more of this mysterious and enchanting group of islands.

16 thoughts on “A Flying Visit To Orkney…”