Being a slow artist has its challenges – not the least of which, is how to blog about a ‘work in progress’. I quickly realised that a weekly update here on my stitched tapestries would end up more like a ‘spot the difference’ competition.

In recent months, I’ve gravitated towards Twitter and Instagram as the places to share occasional stitchy updates, where it feels more natural to post a simple picture as I settle down to stitch with the Delinquent Dog curled up alongside.

If you use these platforms, please do keep in touch that way – it’s always lovely to receive messages ‘in real time’.

But today is one of those special days – a day to share for the first time, a work no longer ‘in progress’, but finished!

Very often I find it difficult to know where the inspiration for a particular piece comes from, but at least with this new work I have a pretty shrewd idea. 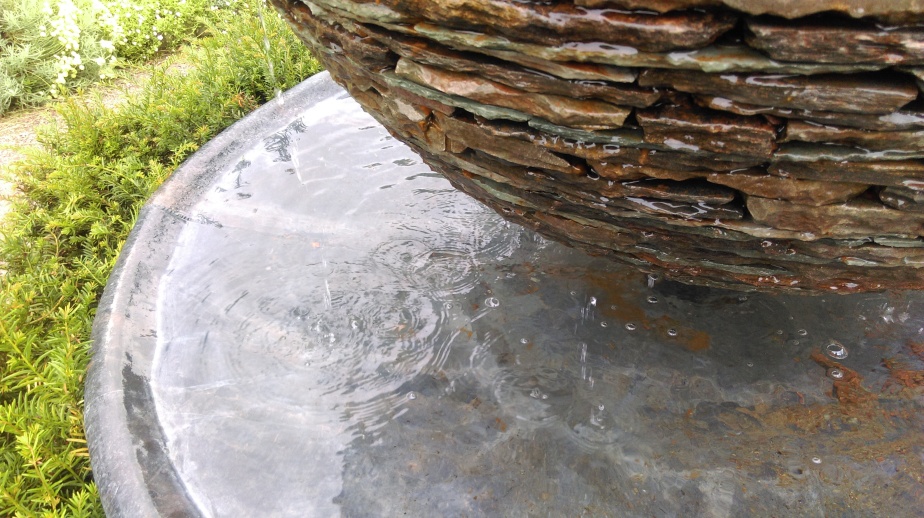 It all begins with that ages-old fascination for watching water moving over stone. I wonder how many generations of people have felt transfixed by watching waves glide over a pebbly beach, or have felt the hypnotic power of staring into a pool of still water at the edge of a river flow, or indeed have been caught up in a fountain’s magical dance.

I for one, can easily lose myself, simply staring into the water.

Now, clearly only a lunatic would attempt to capture that watery, mercurial sensation in a medium as distinctly static as thread – ahh well…

But as ever, the process of stitching has itself been a meditation, a way to drift into a flow of sorts, an escape to another realm, if not a watery one…

Stitched between June and September 2015. Wools, linens and silks on linen scrim.

If you’d like to see it ‘in the flesh’, I’ll be showing it at the Discover Original Art Fair on November 28th & 29th 2015, at the delightful Ivinghoe Old School Community Hub.

There was an error retrieving images from Instagram. An attempt will be remade in a few minutes.