Now, I’d be telling a porky-pie, if I said it had been a brilliant January – sick child, sick dog (when will they learn to use a bucket), leaden skies, snow, ice, more snow and more ice, frozen shower, sick car (amusingly timed trouble with the clutch – great fun on icy roads) – you know – very January.

But – while all that stuff was going on, I was also having a whale of a time with the piece of experimental couching/needlepoint I started at the beginning of December.

This piece has seen me through all the pre-Christmas stressiness, the relaxing time between Christmas and New Year and the grot of the last couple of weeks. I’ve loved every moment! (click on the picture if you want a closer look)

Something about the curviness drew me in completely. As it progressed, it demanded jewel colours and lots of twinkly threads. The day the first red went in, I held my breath, but it was right. So here it is, gaudy, swirly, shamelessly glittery – and I love it.

The only thing it never acquired while I was stitching, was a name.

But then as I thought about it, just one word popped up – hedonism,

Sensual indulgence – the ethical theory that pleasure (in the sense of the satisfaction of desires), is the highest good and proper aim of human life. (Dictionary)

I think that’s what it wanted… 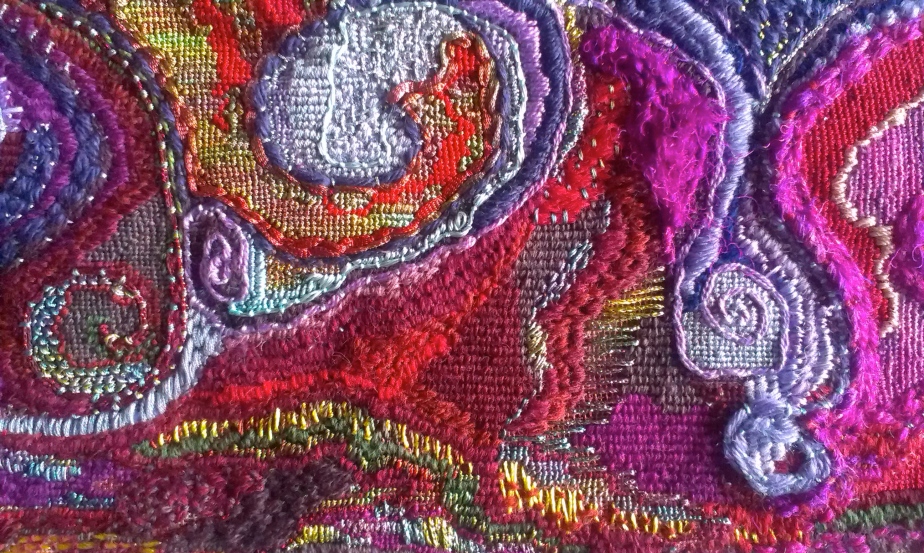 10 thoughts on “Indulging in hedonism…”